After almost two decades of hype, UMAs are on the precipice of an amazing feat. This most complex of managed accounts programs is finally going to eclipse $1 trillion in assets.

According to data from Cerulli, by the end of Q1 2018 UMA assets reached $986 billion.  This is a 31% increase from just three months prior.

After this week’s market downturn, they’ve probably taken a dip. But if growth continues as it has during the past few years, we could be seeing $1 trillion in AUM very soon.

There are a number of drivers behind the emergence of UMA as a central component of many investor portfolios. The past two decades has witnessed tremendous changes which have buffeted the wealth management industry, including the shift in industry focus from benchmark-based to goals-based performance and investors’ steady drift away from active management and towards passive investment strategies.

Some of the trends behind this rapid growth as well as some UMA best practices were shared on a webinar sponsored by technology firm InvestEdge, called 3 Best Practices for Maximizing the Power of UMAs.

Year over year growth was much stronger back in 2010-2012, partially because there was a smaller base, but also because larger managed account programs were being consolidated onto UMA platforms. This resulted in chunks of SMAs and other accounts moving in chunks into UMA rather than organic growth of the product.

This growth slowed and was steady at 22% per year from 2014-2016 until a big jump in 2017 of 36%.  This was most likely due to market movement since a large portion of UMAs are invested in equities, either directly through SMAs or via equity mutual funds and ETFs. 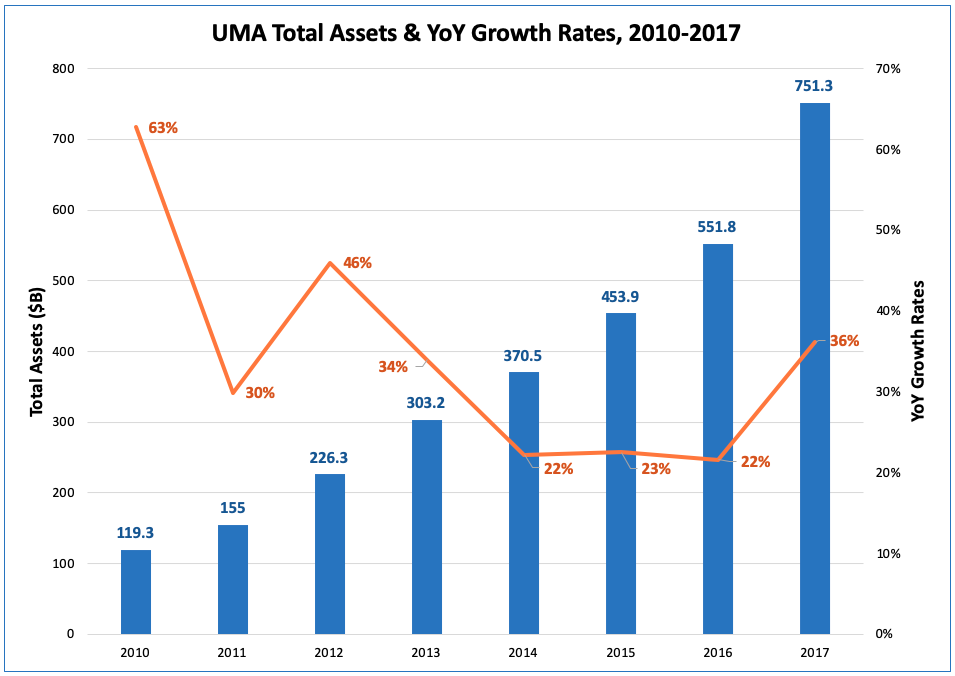 UMA as a share of overall managed accounts has held steady at around 37%.

The use of SMAs inside a UMA has dropped from almost 80% in 2006 to just under 31% in 2016. This is due to the democratization of UMAs across the industry. As UMA technology has improved, more wealth management firms have been able to consolidate all of their managed account programs onto their UMA chassis.

Once Mutual Fund Wrap or ETF Wrap accounts could be supported inside a UMA sleeve, many of those separate platforms were shut down and the programs migrated to UMA accounts. This was one of the tailwinds behind the rapid expansion of mutual funds and ETFs inside UMA accounts, as shown in the graphic below.

Increased scalability of UMAs has allowed many firms to lower their account minimums, since the cost of supporting each account has dropped. Smaller account sizes means that some smaller sleeves might not meet the minimum investment amounts for many manager strategies. This has also increased the usage of mutual funds and ETFs to represent these smaller asset allocations.

Jackie Rothar, UMA Product Manager, InvestEdge shared some statistics and feedback from their bank/trust clients who have implementing their new UMA and managed accounts platform.

Many clients request help with ways to reduce costs and increase efficiency as well as delivering model management in a scalable way?  Both of these requirements can be addressed through a UMA.

One of the original benefits of UMA and probably the best reason why they were created was to consolidate existing SMA accounts.  Many vendors charge $5-$10 per account per month to manage SMAs on their platform.  InvestEdge research across their account base shows an average of 2-3 SMAs per client relationship, with some larger clients having 6-7 SMAs.

Collapsing between 2-7 SMAs into a single UMA could provide significant cost savings.

All management tasks become more efficient when you reduce the number of accounts.

The average size of SMA accounts for InvestEdge’s clients is around $750,000, which if converted into UMA accounts with three sleeves each, would be almost 5X the industry average size.  (See InvestEdge Peers a Decade Into the Future at Their Strategic Partner Forum)

For anyone evaluating a wealth management that supports UMA, make sure that it offers a way to drill down into the manager strategies to see the underlying holdings.  As Rother explained, the detail view allows the advisor to understand each account’s exposure to specific sectors and sub-asset classes. For example, if a manager has a small cap mandate but some of the underlying holdings are creeping up into mid cap, the advisor can make a decision to switch managers or adjust other holding to compensate.  Only a detail view would provide this level of transparency. 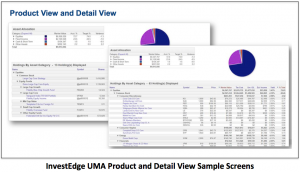 Another important feature for a robust UMA platform is the ability to net trades across sleeves.  This is important for accounts that are tax sensitive such as high net worth clients for whom capital gain/loss management is an important consideration. It is not uncommon for multiple managers to have overlapping holdings even when they have different asset class mandates. This can happen between small and mid-cap managers in that grey area in between the two.

A good UMA rebalancer should be able to identify when opposite buy and sell orders for the same security have been generated for two models in the same account. The system should net the trades out by changing the sleeve tag on the tax lot rather than submitting two separate trades. This can save on potential capital gains as well as reduce trading costs.

This is a common challenge for firms implementing a new UMA program, how to balance the need for individual customization for each client against the need to reduce operating costs by standardizing everything to make it easier to manage. (See 4 Tips to Avoid Disaster When Choosing a Wealth Platform)

This issue was highlighted in a recent Celent report by well-known industry expert, William Trout: 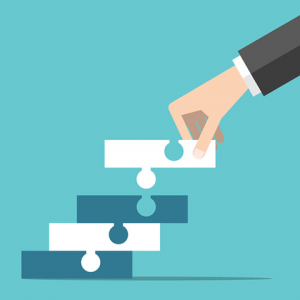 In many ways, UMA has served as a lightning rod for conflict between the sponsor firm and the advisor. Nowhere is the tension between customization and scale more acute. While the rep or advisor may seek to customize a portfolio to justify his fee, the interests of the UMA sponsor inevitably are skewed toward scale.

A full-featured UMA platform should be able to help with this dichotomy by enabling mass customization at scale via different types of account restrictions, which Rother reviewed:

The amount of standardization and scale achieved with a UMA program also depends on where the investment management decisions are being made, either consolidated in the home office or distributed to the advisors.

As the Celent report stated, there has been a noticeable trend towards scale recently due to the rising costs of client acquisition and fee compression. Rep-as-PM (RPM) is still the largest managed account program by far and growing, even though home office portfolios outperform advisors. (See Advisor-Managed Portfolios Knocked Out by Home Office Performance – Cerulli)

If the UMA program is designed such that everything is controlled by the home office, this can deliver the maximum scale, if implemented using best practices.  One small group making all decisions on asset allocations and manager strategies across a finite set of models is very efficient.

However, if the investment management responsibility is distributed to the advisors, as is usually done with RPM, this will negatively impact scale, but will increase the opportunities for customization since advisors can be more attentive and responsive to client requests. Since the rebalancer still controls the generation of orders, some scale can be achieved, especially if trading and rebalancing are controlled by the home office, while the advisors build the models.

Another customization that is frequently requested is the need to maintain certain positions as “below the line” or “unmanaged”, Rother reported. These are usually low cost basis positions that were transferred into the account from another firm and the client does not want to sell to avoid a big tax hit.

The “below the line” or “unmanaged” options should both flag the position so the rebalancer doesn’t see it as being outside the model and continuously generate sell orders for it. The performance reporting system should not include this position in any performance calculations. Finally, the billing system should also see this flag as an indicator that the asset value should not be included in the client’s management fee.