NorthWestern Mutual rolled out a new investment platform for advisors that integrates technology and services from a number of different vendors to provide and end-to-end wealth management experience. A big part of this platform is retirement planning and the core of this is provided by LifeYield, which will soon include an iPad app for advisors. Details about the new platform were presented by Erin Ennis, Senior Investment Consultant, Northwestern Mutual Wealth Management Company and Jack Sharry, EVP, Strategic Development, LifeYield in a session at the Money Management Institute’s 2012 Tech & Ops Conference, which was held in Jersey City, NJ.

Sharry observed that a typical investor in the mass affluent segment and above has 2-3 advisor relationships at different firms along with five or six accounts at each. Most of these investors are open to the idea of consolidation, but need a good reason to do so, he said. NorthWest Mutual’s platform conforms to a new approach to retirement planning recently developed by the MMI Retirement Solution Committee, of which Jack Sharry is chairman. The approach is called Personal Retirement Income Solution Management (PRISM) and is explained in a white paper entitled An Emerging Category: Personal Retirement Income Solution Management.

NorthWestern Mutual’s platform was designed to provide advisors with a set of compelling argument for clients to consolidate assets with them. it provides advisors with powerful tools to assist clients in planning for and optimizing cash flow during their retirement, Sharry said. 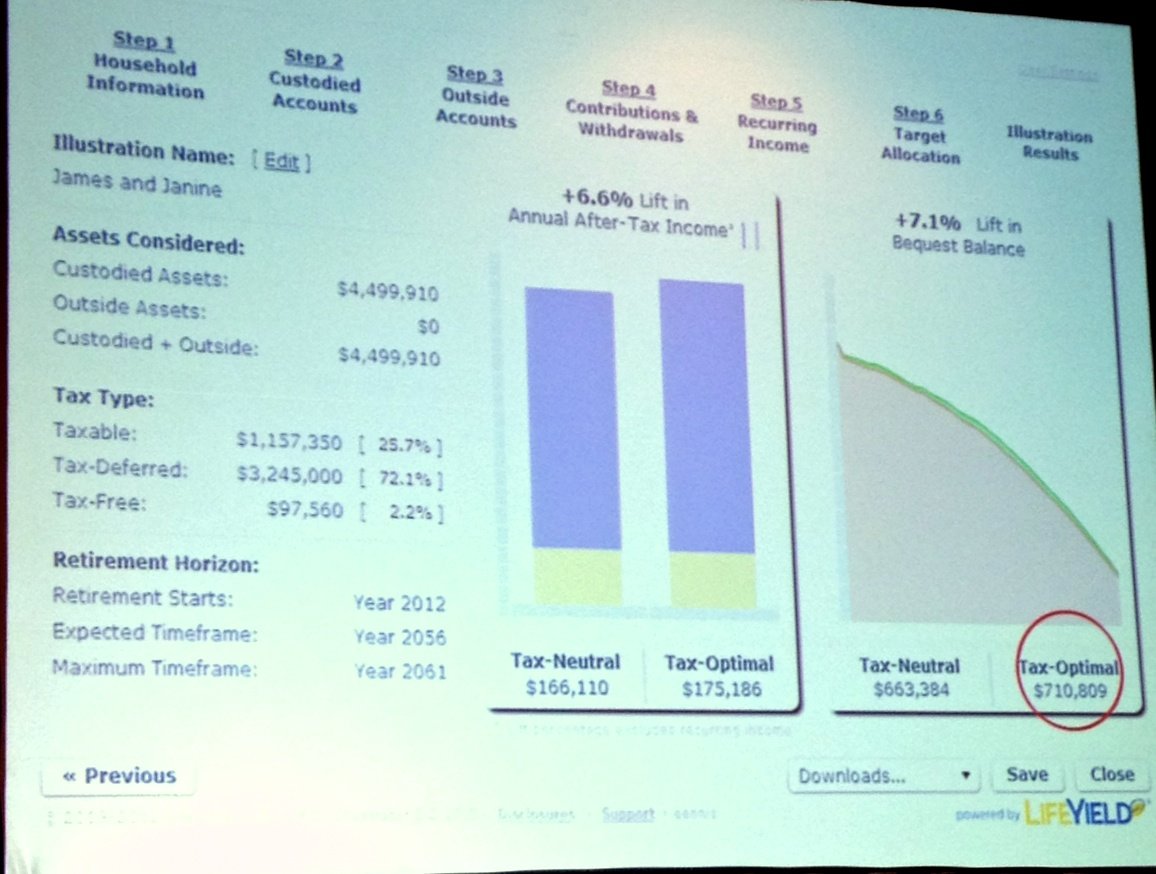 The LifeYield iPad app will enable NorthWestern Mutual’s advisors to demonstrate to clients how they are progressing towards their retirement goals quickly and easily, according to Ennis. They can click one button and change the inputs and the app will instantly show the effects on their future savings. The app, which is called LifeYield Illustrator, speeds up processing by using default mortality tables, running scholastically, with an inherent level of success in meeting minimum level of thresholds, driven by NorthWest Mutual’s capital assumptions, he said.

For example, say a client wants to have $1 million in income starting the first year of retirement. After entering their current state into the system, it will promptly generate a display as shown on the right. In this case, the system projects that the client will only have $710K in income, even with tax optimization. To try and rectify this, the advisor can quickly push the retirement date out five years and recalculate. As you can see in the next screen, the result of the change is that their projected income is now $995K, which is just about at their goal.

Ennis explained that advisors can run alternative scenarios in a matter of minutes. The LifeYield system is efficient, accurate and consistent and ensures that the advice being provided is directionally correct. This helps to establish a sound, proven judicious planning process, he said.

LifeYield has a history of working with managed accounts, according to Martin Cowley, LifeYield’s EVP of Product Development. The system helps clients to methodically 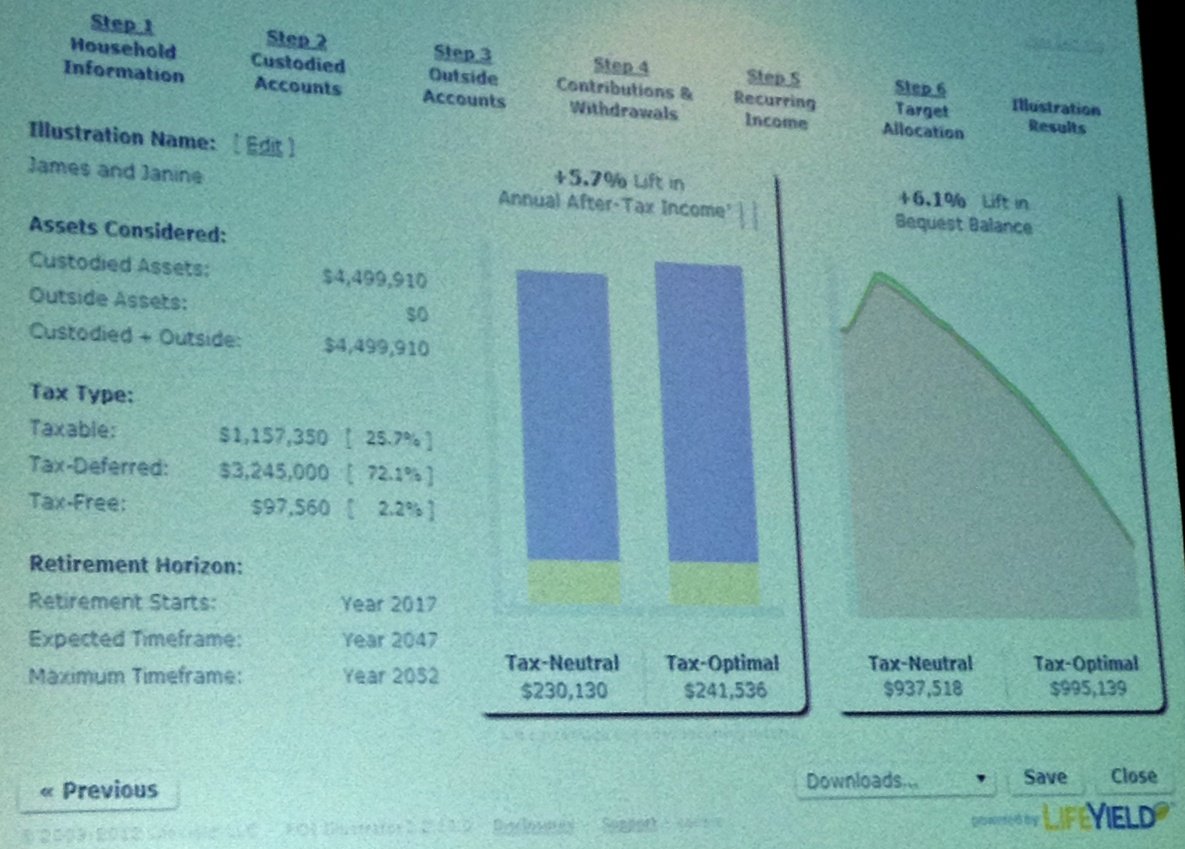 generate the most retirement income possible from a preexisting set of investments. But it isn’t a simple process, he said. There are many inputs required in order to generate a retirement income stream including withdrawal sequencing, tax optimization, and the firm’s capital markets assumptions, to name just a few.

Some recent research done by Ernst & Young and commission by LifeYield discovered large benefits when properly locating assets before retirement, Cowley reported. This minimizes the future tax footprint across the same set of assets. A high level display of simple asset locations on the future iPad app is shown on the right. It shows bonds located mainly in the IRAs and equities located mainly in the taxable accounts, in a simplistic format that can be shown to clients.

In order to allow advisors to demonstrate these benefits to their clients, LifeYield took their trading algorithm and baked it into a Monte Carlo Simulation and played it out over time, which is then represented graphically, he said.

If the advisor has access to a list of the client’s outside assets (those that are managed by other institutions), LifeYield can evaluate them and generate a report showing the potential increases in assets and retirement cash that the system could generate when compared to where they are managed now. This type of report can be extremely helpful to advisors in order to increase their client wallet share and encourage them to consolidate assets, Cowley proposed. 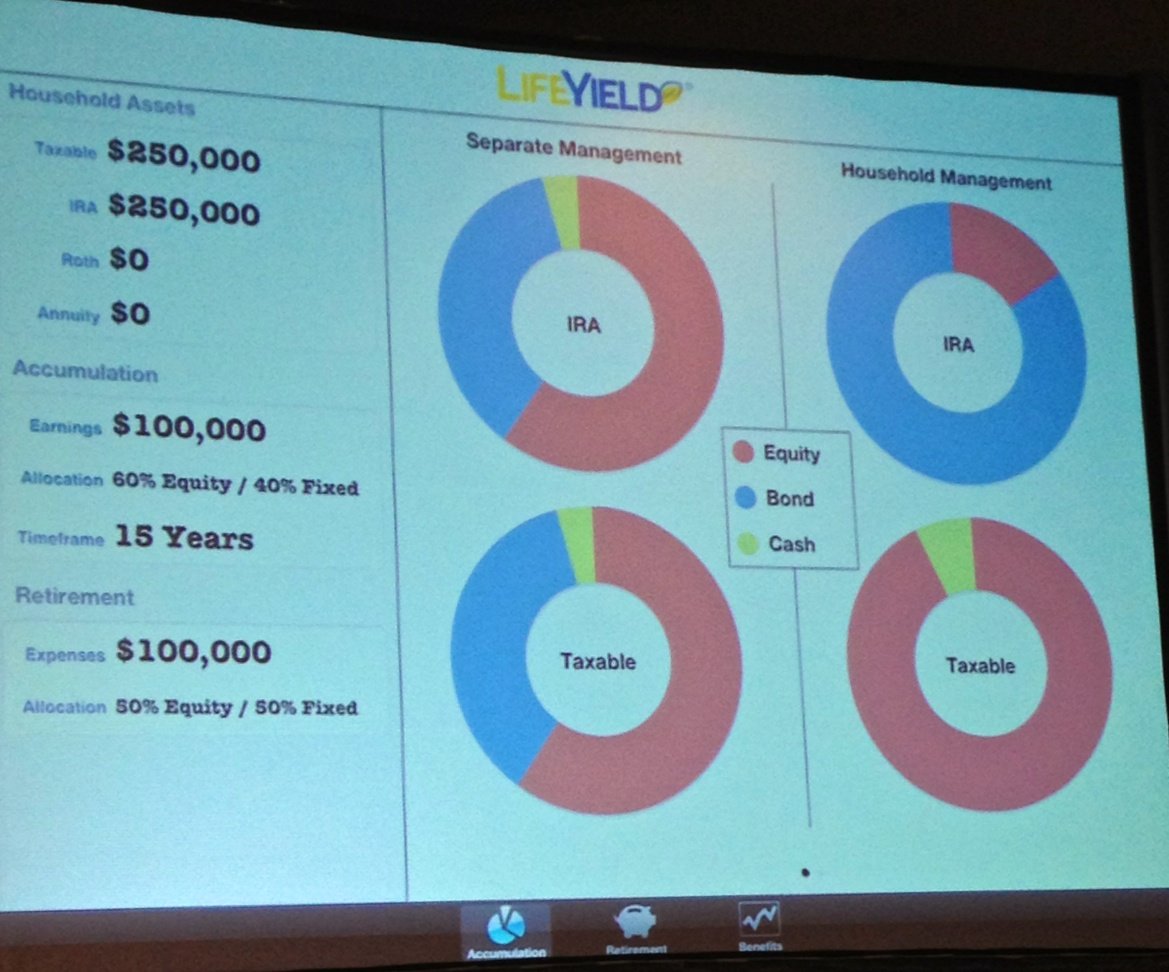