It wasn’t supposed to be this way

The robo-advisor concept began as an idea that could disrupt the wealth management industry.  It started moving through a series of phases that are common to disruptive ideas and technology.  Disruptors like Amazon, Apple and Uber all went through these phases with their products and services.  New business models rose up to slay the incumbents and bring about a new paradigm in their respective industries.

But, the robo-disruption hit a bump along the way.
Follow @wm_today

We started with the “innovators” phase when automated investment advisors first appeared and started gathering assets.  Next was the “discovery” phase when the industry took notice amid breathless coverage from the press.

Then came the “incumbents try to catch up” phase as Charles Schwab and Vanguard launched their own online solutions and in a few months hoovered up double the assets of all the first movers combined.

What?  That wasn’t supposed to happen!

The bloated incumbents were supposed to fail.  Flailing themselves against the first mover advantage of the innovators and watching helplessly as their customers and profits were stolen away.

It seems we have quickly reached the “cost or shakeout out” phase of the industry lifecycle, as described by Investopedia:

Companies settle on the “dominant design”; economies of scale are achieved, forcing smaller players to be acquired or exit altogether. Barriers to entry become very high, as large-scale consolidation occurs.

I’m going to refer to this phase of the robo-advisor lifecycle as “bayoneting the wounded”.

Among the first movers, Wealthfront and Betterment seem to be making the most noise and trying their hardest to stick the bayonet into the other’s ribs.  They must be feeling the heat as they are running neck and neck in the race to be the third biggest player in the space behind Vanguard’s Personal Advisors Services and Charles Schwab’s Intelligent Portfolios.

A recent article by Ali Malito for InvestmentNews reported that Betterment has reached $2.5 billion in AUM, catching up to competitor Wealthfront, who reached the milestone just a month or so earlier. 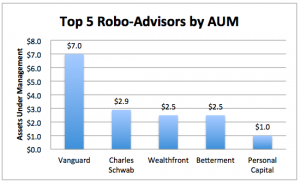 Unfortunately, Betterment does not break out retail and institutional assets so there is no way to know how much of their AUM is from the B2C side of their business.  Whatever the actual value is, it means that they are actually trailing Wealthfront in B2C assets.

But does it really matter?

Being the third or fourth place isn’t so bad if there are enough assets left after the big guys get their share. According to a study by McKinsey & Co., there are approximately 42 million households worldwide, representing $13.5 trillion in financial assets and $66 billion in annual revenues, with at least 20% to 30% of mass affluent and affluent consumers likely to be receptive to the virtual advisor model.

But they have to stay in business long enough to make a play for these assets when they become receptive.  And that means getting bigger, now.

Schwab pulled in almost $3 billion in only four months.  Vanguard has piled up over $7 billion since their official launch less than three months ago (not including the $10 billion they moved over from another program).  Vanguard is leaving everyone behind as they race to a commanding lead.

And Wealthfront is crowing about reaching $2.5 billion in three and a half YEARS?  Really?  (See Wealthfront Is No Charles Schwab, Yet!)

I would wager that in a short time, a majority of Betterment’s assets will come from their Betterment Institutional division. Their partnership with Fidelity was a major coup for them and gave them a seal of approval with advisors, many of whom are realizing that having their own online automated advice solution has become table stakes in the market. (See Advisor-bots: Beware of The Swarm)

Pershing has already announced a robo-advisor partnership and TD Ameritrade already has connected a smorgasbord of robos into their Veo platform.  Every advisor will soon have their own low-cost, automated, online advice channel.

If the consumer-facing robos think it’s getting harder to gather assets, wait until they have thousands of new clones from every RIA in the country.

Besides the advisorbots, it’s going to be difficult for robos to compete with the industry titans for investor assets.  “You won’t see the same growth without the name recognition or trust that a Vanguard, Schwab or Fidelity have,” I stressed to Malito from InvestmentNews.

Transferring your life savings to an online advisor is a more involved transaction than buying a book, signing up for social media or hailing a cab. Opening an investment account has a lot more friction with paperwork and signatures and involves a commitment that sets it apart from other products and services that have been disrupted in the past. 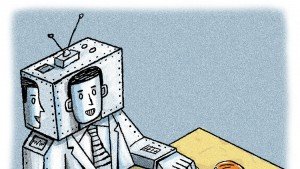 Online advisory AUM will flow to the firms with more established brands than to the new guys.  A majority of investors just won’t trust their money to names they just heard of a few weeks or months ago. The robos that have pivoted to become platform outsourcers for advisors, will find much more success than those still putting all their eggs into a strategy of out-Vanguarding Vanguard.

This hybrid model, selling to consumers as well as advisors, along with the B2B-only model, will soon be seen as the best way to succeed in this market. Firms like Jemstep, Upside (acquired by Envestnet) and Oranj have already bet on this by eschewing a consumer-facing business. (See Oranj David Lyon: We’re The Un-Robo-Advisor)

Exciting new features can help separate firms from the robo-pack.  Betterment just launched a new feature they call Smart Deposit, which acts like a sweep account.  You create a pre-set balance amount for your checking account.  Any cash above this amount gets automatically transferred to your Betterment account.

I can see a lot of people taking advantage of this feature to help increase their savings by automatically moving extra cash before it can be spent.  If this feature is successful, Wealthfront and others will have to build their own versions.

As I explained to Malito:

“Innovation is what is going to keep attracting assets [to robo-advisors],” … “The easy money is gone.”

The game of technology and product leapfrog is on.  The winners go on to fame and fortune via acquisitions at astronomical valuations or possibly through IPOs.  Their VC backers count their money and put their logo on their Successful Exits web page.  The losers are forced to sell at bargain basement prices or close up shop all together.  Their VC’s write off their investments and hope their annual limited partnership fees keep flowing so they can make the payments on their Teslas.

It’s a zero sum game.  Based on the speed that the industry is currently innovating, I think we’ll start seeing the winners separating from the losers pretty soon.